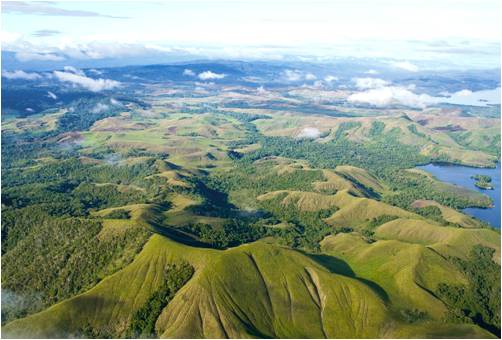 In all its years, Aviat Networks has installed a great many microwave radios and in some very interesting places. On the sides of the largest dams. On top of the most famous bridges. Deep in the Aboriginal Outback. Way out to sea. In the frozen wastes of the Great White North.

Our latest triumph of man and mechanism over elements comes by way of Papua New Guinea, one of the last lands to be touched by the progress of high technology.

Deep in the heart of this primordial island nation, an imposing mountain stands: Mt. Otto, nearly 11,000 feet (3500m) of steep slopes and very little summit. Few people climb it. There are virtually no roads of which to speak. The only practical way to bring wireless telecom gear up is via helicopter.

However, Aviat Networks was equal to the challenge. Aviat’s services department is loaded with can-do problem-solvers keen to tackle projects like this. In this case, a critical issue for the Mt. Otto site revolved around power. Issue resolved with a big Eltek generator, part of an amazing energy solution that powers an Aviat WTM 6000 14+2 repeater with a 7+1 spur—all built to run at Mt. Otto’s high altitude without supervision for extended periods. If we look a bit closer at the site specs, we will see:

To keep the site online, an array of 96 solar panels powers the microwave radios with 24 kW of electricity. As backup, the 80KVA Eltek generator provides up of five days of continuous current in case of extended cloudy weather. It is capable of this as it runs on fuel that’s kept warm in a modular container. Otherwise the fuel would freeze solid in the thin mountain air. A large battery installation provides an extra five days of backup power. Those same solar panels top off the charge on these 57,000 pounds (25,704 kg) of batteries. It’s a closed system completely designed for 100 percent off-the-grid operation.

To complete the site, required dozens of sorties airlifting personnel and all the material necessary to build and install the site. Overall, the Mt. Otto site is an amazing accomplishment in a super remote and hard-to-get-to place.