The Garden Route district is located along a 300 kilometer stretch of the south-eastern coast of South Africa in Western Cape province, about 450 kilometers east of Cape Town. It’s a popular tourist destination, especially in spring and summer. However, its lush vegetation is prone to field fires, particularly in drier times.

In late October 2018, field fires raged across the area, with ongoing blazes in the municipality of George and the Outeniqua Pass area. Hundreds of municipality firefighters, area volunteers, and firefighters assisting from other districts fought to contain the fire. Seven fatalities were reported, and the pass was closed for an extended period. Entire suburban sections of George, not far from thickly wooded areas along the Garden Route, were evacuated.

Field communications, during such fires, are critical in keeping recovery efforts moving forward effectively. It is especially true in remote, rugged, hilly, and forested regions, such as much of the backcountry along the Garden Route.

Throughout the fires, responders relied heavily on Aviat Networks backhaul systems. Aviat wireless backhaul aggregates traffic from cell stations and sends it into the core network for further routing. Aviat deploys this technology widely in Africa, with multiple installations along the Western Cape where the fires occurred.

The Aviat technologies and installation expertise came through with flying colors during the fires. 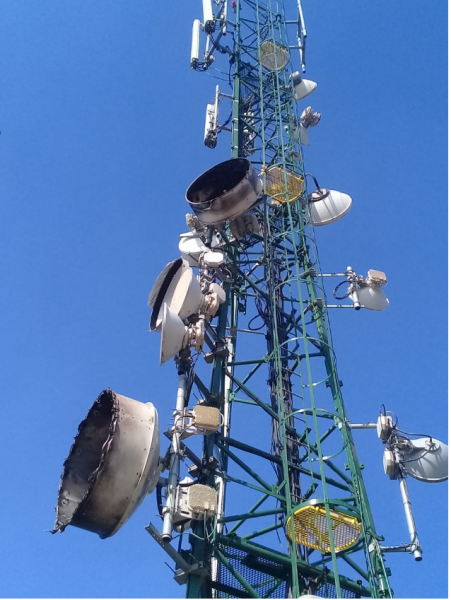 Although tower antennas suffered flame-over and were severely scorched and damaged, all antennas performed as designed. The specific standout performances included:

The photo clearly shows the extensive surface damage to the antennas. It is remarkable that even with the extensive loss, systems performed as designed and critical communication capabilities continued throughout the fires.

Aviat is committed to supporting mission-critical communications and helping save lives. Each product development and upgrade released is intended to help support the public safety community in their time of need. If critical communications weren’t sustainable during a disaster, the impact would be far-reaching. The success stories of the Aviat radios, like the example in George, are why we do what we do.