5G is fast becoming a reality in many parts of the world. According to the Global Mobile Suppliers Association (GSA), 461 operators in 137 countries/territories are now investing in 5G, including trials, licenses acquisition, planning, deployment, and launches. Of those, 176 operators in 72 countries/territories had launched one or more 5G services.

Map of operator investments in 5G

But despite this progress, there continues to be a substantial global digital divide. According to the GSMA, 450 million people live in areas with no mobile broadband coverage (the ‘coverage gap’), but more importantly, there are still 3.4 billion people that are already covered by mobile broadband, but who are not using it (the ‘usage gap’). The Covid-19 pandemic has highlighted the value of mobile phone networks, which remain the only form of internet access for many people, particularly in rural areas. One region that notably lags behind the rest of the world is Sub-Saharan Africa.

Market penetration by region and technology, current state, and forecast 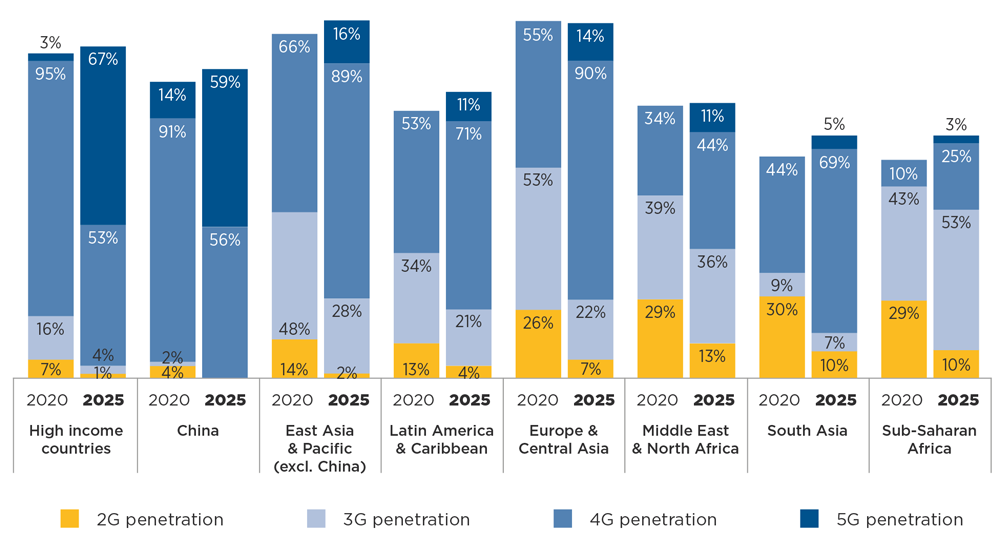 Penetration is calculated based on the number of connections (or SIM cards) rather than unique subscribers. Total penetration can therefore be greater than 100% as an individual can own multiple SIM cards.
Source: GSMA Intelligence

In 2020, the mobile Internet penetration rate in sub-Saharan Africa was just 28%, versus a mobile penetration rate of 46%. Part of the reason for this is that the region had the lowest share of subscribers using 4G technology at only 10%, with 43% for 3G and 29% for 2G. This means that 72% of subscribers in this region are still not able to access the mobile internet using 4G. This reflects a Coverage Gap of 19% or 206 million people and a Usage Gap of 53% or 575 million people. One of the main factors holding back this growth is the cost of Internet-capable devices, like smartphones. The Alliance for Affordable Internet (A4AI) indicates that the average price of a smartphone in Africa is US$62, which is 62.8% of monthly gross national income per capita, but this percentage can be much higher in certain countries.

By 2025, the GSMA expects that 3G usage in sub-Saharan Africa will actually increase to 53%, as well as usage of 4G to 25%, while 2G will decline to 10%. During the same period new 5G networks (primarily in South Africa) will service just 3% of subscribers. Consequently, it will be primarily 3G and 4G that will help bring the number of mobile subscribers to half a billion in 2021 and 50% subscriber penetration by 2025, driven by an investment by telecom operators of $45.2 billion.

So, what does this mean for mobile networks across sub-Saharan Africa? Clearly, 5G is not on the radar for many operators, who will continue to heavily rely on legacy 2G and 3G networks. Despite this, there remains significant work needed to upgrade the network infrastructure to support the gradual rollout of 4G technology, but also the significant increase in data demand and new services that this will bring. Many networks are just not prepared to cope with the additional traffic requirements, but also with the shift from legacy voice services to high-speed mobile data. This means not only greatly enhancing the capacity capability of these networks, but also a wave of modernization to replace legacy technologies such as TDM, with L2 Ethernet and L3 IP/MPLS. Network architectures also must evolve, from largely inefficient tree/branch topologies to incorporate more resilient and flexible ring and mesh. At the same time, operators must manage all this with constrained budgets and a customer base with some of the lowest revenue per subscriber in the world. That’s quite a feat!

Upcoming in Part 2:  Even if 5G support is considered a longer-term concern, network operators are being driven to modernize their networks today to cope with growing traffic. What’s the best approach to meet that requirement and ensure 5G-readiness when the time comes?

I would like to discuss our network modernization plan