By Alice Chen, Sales Team, US

The Milan Plague outbreak in 1485 killed off nearly one third of the city’s population. The incident galvanized Leonardo da Vinci to create an Ideal City1 with better sanitation, transportation, and communications to prevent the spread of disease. The vision of a wireless communications system was born. The blueprint began with constructing a central tower to communicate information over greater distances, with the capability to act as both a transmitter and repeater, and ultimately evolved into the wireless transmission and microwave radio of today. Da Vinci, better known as an artist, was also an architect, engineer, and inventor. He was the foremost creative mind of his time, his practical solutions to problems of the day and his visionary approach is an inspiration to Aviat to continuously improve the transmission of microwave radio signals. 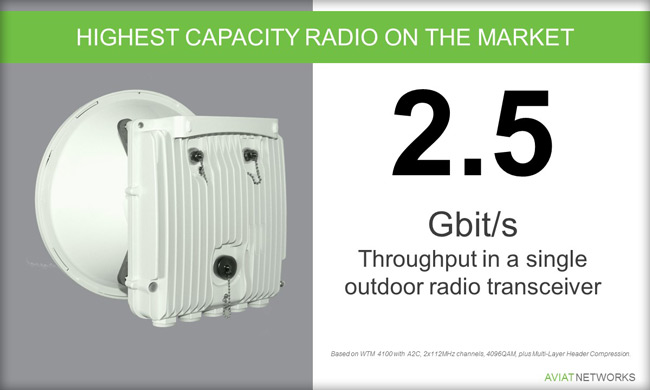 To meet the needs of these applications, and as a validation of the progress made in the microwave industry, Aviat introduced the WTM 4000 – the industry’s highest capacity microwave radio ever built2. The new radio platform provides better value than the cost of logistical hard-wiring fiber and cable. Benefits of using the WTM 4000 include:

The WTM 4000 platform was originally developed for the telecommunication carriers to meeting new media streaming high bandwidth demands. However, the adaptability and installation options also make WTM 4000 a great choice for State and government agencies providing public safety services, something da Vinci would be proud of.

Thus Aviat’s WTM 4000 is well positioned as a cost effective solution for telecommunication carriers as the new solution offering the adaptive coding and modulation that maximizes bandwidth efficiency to successfully support streaming media in addition to advanced networking capabilities to support IP/MPLS services.

Over several testing and trials sessions, WTM 4000 as the more adaptive and integrated device provided higher capacity and reliability ever delivered in a microwave radio, with up to 2.5 Gbps uncompressed throughput per radio transceiver. In comparison with other microwave radios on the market, WTM 4000 is the industry’s first purpose-built IP-SDN radio with an integrated IP/MPLS software stack and built-in support for SDN protocols similar to NETCONF/YANG and OpenFlow for standards-based network automation.

I dedicate this article in memory of Leonardo da Vinci, a renaissance man whose broad intellectual interests planted the seeds of innovation in many disciplines. Since da Vinci’s time, communication systems have evolved and as there is increase in demand for mobile data traffic and microwave wireless transmission, the new WTM 4000 platform is a fitting telecommunication solution to meeting present and future communication requirements. Aviat, as a company, pledges an evolution commitment to better wireless transmission to meet the ever changing landscape. We hope you enjoyed our Wireless Transmission Blog bringing you the latest discussions and trends on new microwave equipment technology.

By Alice Chen, Sales Team, US

To learn more about Aviat and WTM 4000 please select the links below for more information.