Using the Aviat WTM 4100 or the WTM 4800 Multi-band with A2C+ and two 112 MHz channels achieves link capacity as high as a single 224 MHz channel, but with better performance, more uptime, and greater flexibility.

First up: The Advantages and Considerations of Wider Channels

Support for wide 224 MHz channels is a recent evolution in microwave. It enables high link capacities using a single radio transceiver, lowering the cost-per-megabit. Now instead of adding another radio to double capacity, you can double the channel size using the same radio to achieve the same result (more or less).

But using wider channels does have some planning implications – in bands below 18 GHz, the RF filter/diplexer bandwidth is typically too narrow to support this channel size. In the 18 GHz band and above, diplexers are wide enough, but using 224 MHz channels (or 220 MHz in the 18 GHz band) is more susceptible to rain attenuation. The result is that system performance will be around 4 or 5 dB less than that of the next lower channel size (112/110 MHz), requiring shorter paths or larger antennas.

Also, higher bands between 18 and 38 GHz are typically in heavy use in most countries, often very congested with a lack of channel availability for a new link or to expand the capacity of an existing link. In some European countries, for example, bands such as 38 GHz are so crowded that securing even a single 56 MHz channel allocation can be difficult, if not next to impossible, let alone a 112 MHz or now 224 MHz channel in a single contiguous block.

Consequently, wider channels like 224 MHz may only be usable for operators who have block spectrum allocations, or who are deploying links in bands that are relatively new and uncongested, such as 32 GHz. If a network operator doesn’t have access to block spectrum and is trying to deploy a high-capacity link in 18, 23, or 38 GHz, then good luck finding a 224 MHz allocation!

Next: How Aviat A2C+ Changes the Game

An alternative to using a single large block frequency is Aviat’s unique A2C+ software feature which supports two adjacent 112 MHz channels in a single WTM 4100 or WTM 4800 Multi-band radio to deliver the same aggregate bandwidth as 224 MHz for the same CAPEX. And there’s even more to the flexibility offered by A2C+. Instead of using a single 224 MHz channel allocation, a network operator can use two non-adjacent 112 MHz channels for more options in frequency assignments where one large frequency block is not available. A2C+ can also help with narrower channels where licensing can be even more difficult – for example, when deploying a link with 2×14 MHz non-adjacent channels instead of a single 28 MHz allocation. 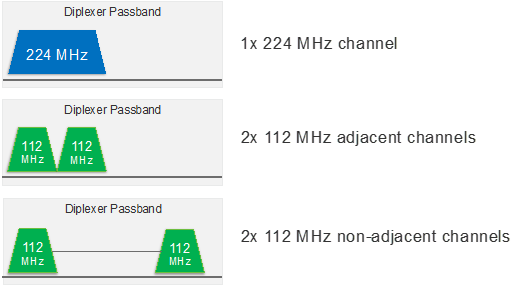 Using A2C+ also improves link uptime, as during any rain fade event the Aviat WTM 4100 or WTM 4800 Multi-band will automatically revert to single 112 MHz channel operation, providing an instantaneous system gain boost of up to 7dB to maintain traffic continuity for longer under severe conditions. A2C+ will deliver better link performance with much more uptime than using a single 224 MHz channel with adaptive modulation (ACM) alone.

And if capacity is a priority, using two 112 MHz channels also supports up to 4096QAM on both channels, for up to 15% or more throughput compared to new systems that support 224 MHz with modulations up to only 1024QAM.

Consider WTM 4100 or WTM 4800 Multi-band with A2C+ to deliver these benefits in your link planning:

Yes, using a 224 MHz channel can provide higher link capacity, but why opt for that solution when the WTM 4100 and WTM 4800 Multi-band with A2C+ – using adjacent 112 MHz channels – deliver even higher capacity and more?

Aviat A2C+ software is now available for download in the Aviat Store for the WTM 4100 and WTM 4800 Multi-band, and it can be remotely installed.

I would like to get more info about Aviat A2C+