Did you know?…Multi-Band makes the most sense only when you combine E-Band with Licensed Microwave

As we have talked about in previous posts, Multi-Band is a great way to improve the reliability and reach of E-Band, or to increase the capacity of licensed microwave bands, by combining both into a single, easy-to-deploy solution. More recently, we have seen Multi-Band solutions that utilize unlicensed 5 GHz band radios in place of licensed bands like 15, 18, or 23 GHz, but does this actually make sense?

The use of a microwave link in parallel to an E-Band link is so that when the latter fades due to rain attenuation, the licensed band links will continue to support up to 99.999% availability for critical, high-priority traffic. However, if this link is supported by the unlicensed 5 GHz band instead, then that reliability and high availability will be compromised. Unlicensed band radios all work on a ‘best-efforts’ basis, meaning that their throughput at any point in time is not guaranteed and can be affected by interference from other adjacent uncoordinated links. Further, most unlicensed radios are TDD, meaning a single radio channel is shared by the traffic in each direction (as opposed to FDD in licensed bands), reducing the available throughput capacity to just a few hundred megabits (full-duplex), or less. Unlicensed radios also lack many of the carrier-grade features found as standard in licensed microwave solutions, such as high modulation up to 4096QAM, wider channel bandwidths, dual-channel operation, and advanced Carrier Ethernet features. Licensed microwave can also support much more capacity for critical traffic – up to 1 Gbit/s in a single channel, or more than 2 Gbit/s using dual-channel with Aviat’s unique A2C feature.

Also, compared to Aviat’s single-box Multi-Band WTM 4800, a solution based on 5+80 GHz would rely on separate radios, and likely not support hitless combining and selection between the 5 and 80 GHz link. In fact instead of full-duplex and sharing capacity, some solutions operate in more of a ‘hot-standby’ configuration, where the E-Band link is the primary path, and then when it fades traffic is switched (with the resultant traffic interruption) to the 5 GHz path.

In a Multi-Band system, the whole objective is to extend the distance of the E-Band link by up to 4x, while also protecting high-priority traffic on a parallel microwave path. In which case, it is essential that during the rare periods when the E-Band link fades or goes out of service that the second path is available and provides maximum capacity. This availability and capacity cannot be guaranteed when using the ‘best-efforts’ 5 GHz unlicensed band.

For these reasons, Multi-Band really only makes sense when you combine E-Band with Licensed Microwave. 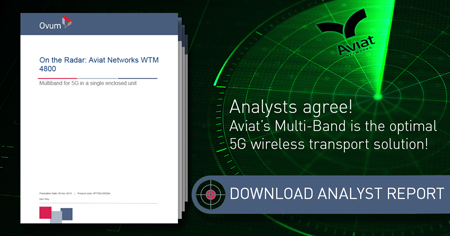 Talk to one of our representatives to see how you can integrated our single-box Multi-Band solution in your wireless transport network.