In the world of wireless backhaul, software licensing on microwave radio remains the same as always. Fundamentally, little has changed over the years. You need a separate license for almost every software component—capacity, feature and, in some cases, port licenses. Too many and more coming! 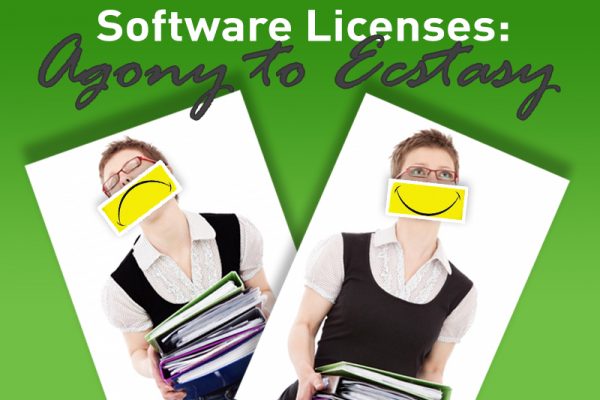 Licenses for microwave software make it an agony for operators. How can we turn it into ecstasy? Photo credit: Foter.com / CC0

Generally, licenses associate with hardware—either product modules or flash cards—and ship with the hardware. In some cases, operators can swap hardware modules without affecting licenses. However, microwave vendors usually maintain highly restrictive policies about swapping. As a result, operators find it virtually impossible to move licenses from an original unit to a replacement unit. But licenses could get delivered after initial radio deployment via license key over email. Typically, however, license generation gets done through software or manually by the vendor.

To order software licenses, operators will most often complete the microwave vendor’s standard purchase order process—which can entail large overhead for a small value component. Crucially, operators must have the serial number of the original hardware or flash card in order to place the order.

Software Licenses and their Complications

With too many software licenses to manage, microwave backhaul operators need a solution to simplify the complications of a byzantine process. And while some vendors offer tiers of software features in one license, we still need to simplify it even more.

For example, consider the following realistic scenario of microwave software licensing. In a large network of 1,000 microwave links, each link may have as many 10 software licenses. That’s 10,000 licenses to manage! And they need management for the entire lifecycle of each microwave radio in the network! That’s too many licenses for too long. Operators have better things to do with their time.

In addition to all these aforementioned problems, software licenses live with specific radios. That makes it a complete hassle and a paperwork nightmare to straighten out which license goes with what radio. And it just compounds the issue of overhead costs, which fall directly to the opex bottomline.

Adding Features to or Upgrading the Network—Not!

While managing individual software licenses for specific microwave radios has “bureaucratic redtape” written all over it, that pain pales in comparison to the process for actually generating licenses. After haggling with the microwave vendor over the price, creating and placing a PO, getting invoiced and then remitting payment, operators have to wait for the order to get processed and delivered. And all these steps remain subject to delay. In some cases, backhaul sites have to be revisited. Cases to consider include:

And while these may seem like small problems in the microcosm, they quickly cascade and lead to compounded costs and delays in implementing advanced features that users are counting on as well as network expansion setbacks. Besides aggravating rollout snags and skyrocketing costs, the chance for mistakes becomes magnified. Because of the complexity, the process has extreme chance of error.

Mistakes that delay deliveries remain commonplace and complicated licensing can lead to radios enabled with the wrong features, which also causes deliveries that remain late or later.

Too Expensive, Too Complex, Too Uncertain, Too Much!

What it all comes down to: microwave software licensing just got too expensive—in terms of money and time! With upfront costs of licenses starting at 20 percent of the sticker price—or higher—that equals a wasted investment and lost opportunity—especially if the licensed radios sit in a warehouse for a long time before deployment.

When the radios finally do see the light of day, operators often overcompensate by activating more licenses than they likely need just because they don’t want to endure yet another licensing delay. Unfortunately, in the tradeoff for expediency they have to accept more unnecessary costs.

Atop the time and money lost for no appreciable gain, operators also reap the whirlwind of uncertainty. Overly complex licensing schemes make it more difficult to predict long-term opex requirements for microwave software, with feature licenses the prime culprits leading to the most surprise expenses and blown budgets!

Together, all these factors create a highly unconducive environment for operators trying to provision today’s network infrastructure with a software regime better suited to the days of analog radio. Digital microwave may have a lot of 0s in it, but all those software 1s quickly add up to a cost number that while hard to quantify definitely has the quality of “extremely high” as in astronomical!

In the coming weeks Aviat Networks will have some answers for fixing the microwave software licensing problem. To get the news first, sign up here and we’ll let you know as soon they’re ready.