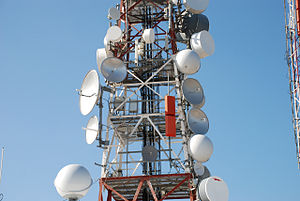 With ever-increasing demand for spectrum in fixed services, FWCC has endorsed opening up the 42GHz band as a new global standard for microwave backhaul. (Photo credit: Miguel Ferrando via Wikipedia)

An ever-increasing demand for spectrum has recently turned focus on the 42GHz band. Initially opened in some European countries following the development of ECC REC(01)04, the recently published ECC Report 173 states 12 countries have opened this band including Germany, Norway, Poland, Switzerland and the United Kingdom. In the U.K., this band was part of a wider auction of fixed service bands in 2010, with three operators being granted blocks of spectrum in the 42GHz band as a result.

Building on this growth there is a move to make this band global and earlier this year saw the publication of ITU-R Rec F.2005, which in effect promoted the aforementioned CEPT recommendation to global status. Aviat Networks has been lobbying key regulators to open this band. We are eagerly awaiting a consultation from Canada and responses have already been submitted to recent consultations from France and Ireland containing considerations regarding opening this band. The process is also underway in Finland and Sweden to open up this band. Recently our attention has turned to the United States and whether the FCC will open this band for use by the fixed service.

Back in autumn 2011, Aviat Networks raised this topic within the FWCC (Fixed Wireless Communications Coalition) as the first stage of a petition of rulemaking to the FCC. At first there was only a lukewarm reception to our idea as there was concern that the FCC would refuse the request out-of-hand as some previously released spectrum below 40 GHz is underutilized and, therefore, why is more needed? We pointed out that much of this spectrum (e.g., 39 GHz) was block-allocated by auction and thus has not been readily available to all users and that the licensees have underutilized the spectrum. There is a growing need for spectrum that can be licensed on a flexible, site-by-site basis, and this is reflected by the fact that there are no underutilization issues in bands such as 18 and 23 GHz, which are licensed in this manner. It is no coincidence that auctioned bands tend to underperform in terms of efficiency and utilization. So, undeterred, we forged ahead and this resulted in the production of a FWCC petition to the FCC in May 2012. The FCC has recently placed this petition on public notice, per its procedures. This is a great success for Aviat Networks and our commitment to seeking more spectrum for the fixed service, but the story has not ended here as can be seen from a recent blog entry from the FWCC.

Aviat Networks will continue work with the FWCC to ensure that the FCC gives this proposal full consideration and, having learned important lessons from past spectrum allocations, we will lobby for a flexible approach to the licensing model.