On Dec. 16 2013, Ofcom—the UK telecom regulator—announced a new approach for the use of E-band wireless communications in the United Kingdom. This new approach results from an earlier Ofcom consultation exercise in which Aviat Networks participated.

To summarize, the new approach, which is available for licensing after Dec. 17, 2013, splits the band into two segments. Ofcom will coordinate the lower segment of 2GHz, while the upper segment of 2.5GHz will remain self-coordinated as per the prior policy.

The segment Ofcom coordinates will follow the usual regulatory processes for all the other fixed link bands it oversees. Moreover, Ofcom has already updated all the relevant documents and forms to accommodate E-band. While we (i.e., Aviat Networks, other telecom vendors) would have preferred the larger portion of spectrum to have been granted to the Ofcom-coordinated process, we welcome this new arrangement because it provides an option for greater security and peace of mind to operators in terms of protection from interference than was envisaged for the previous all self-coordinated spectrum regime.

For a more detailed look at the new E-band arrangement, Figure 1 shows the Ofcom-coordinated section sitting in the lower half of both the 71-76GHz and 81-86GHz bands thus allowing for the deployment of FDD systems in line with ECC/REC(05)07.

In terms of channelization within the Ofcom-coordinated block, the regulator announced that it would permit 8 x 250MHz channels, 4 x 500MHz channels, 1 x 750MHz channel and 1 x 1000MHz channel as per ECC/REC(05)07. Ofcom also stated that 62.5MHz and 125MHz channels will be implemented as soon as the relevant technical standards, etc., from ETSI are published. Figure 2 shows the Ofcom channel plan: 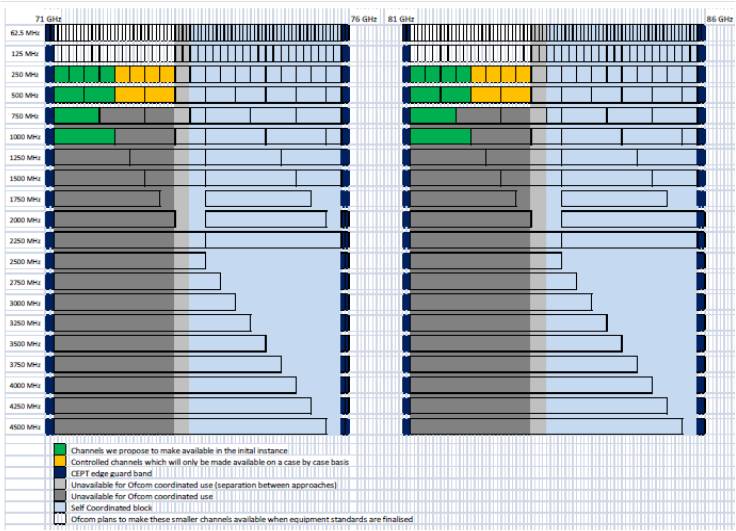 Regarding equipment requirements, Ofcom stated that it will allow equipment that meets the appropriate sections of EN 302 217-2-2 and EN 302 217-4-2. This includes the antenna classes (e.g., classes 2-4) that will allow the deployment of solutions with flat panel antennas. Aviat Networks welcomes this approach and hopes that other regulators—notably the FCC in terms of antenna requirements—currently considering opening up and/or revising their rules for E-band adopt similar approaches.

Notwithstanding the current fees consultation process that Ofcom is undertaking, these “interim fees” will remain in place for five years, after which time the results of the fees review may mean that they will be amended.

Also because of responses received during the consultation process, within the self-coordinated block, Ofcom will now require the following additional information for the self-coordination database: antenna polarization (horizontal, vertical or dual), ETSI Spectrum Efficiency Class and whether the link is TDD or FDD.