One of the great advantages of Aviat’s unique one-box WTM 4800 multi-band solution, apart from the exceptional ease of use and TCO savings, is Aviat’s patented Layer 1 Link Aggregation (L1LA) algorithm. This unique innovation ensures that your most important high priority traffic is preserved without interruptions, frame drops, or bit errors, even when the E-Band channel degrades and drops out of service altogether due to rain fading.

To demonstrate its effectiveness, we captured on video one of our engineers performing a bench test. The link is configured for nearly 10 Gbps of aggregate capacity, supported by one E-Band/80 GHz channel running at 2000 MHz/128QAM, combined with two microwave channels operating in the 18 GHz band, each carrying 1 Gbps in a 112 MHz channel at 4096QAM. The Aviat WTM 4800 dual transceiver radio can support all three channels in one box, using our unique Adaptive Dual Channel (A2C+) feature.

The test link as set by our engineer has two priority streams, one with 2 Gbps capacity set for highest priority, and one set for 7.8 Gbps with low priority. As the E-Band channel is faded, it reduces in capacity and eventually drops. The traffic on the high priority stream is preserved on the microwave bearers, without any frame drops or bit errors, including when the E-Band channel is restored to full capacity.

This test demonstrates the resilience of the WTM 4800 multi-band link with differentiated availability, whereby your most important traffic is supported at highest availability, while your lower priority traffic is supported at slightly less availability on the E-Band channel. Hitless preservation of your highest priority traffic is an essential feature of your multi-band link, and may not be possible with multi-band options from other manufacturers. This includes radios that rely on a hard fail-over to a standby licensed or unlicensed microwave backup, which can result in many errors and frame losses as the E-Band channel drops in and out of service. The Aviat WTM 4800, the only single box multi-band radio in the industry, not only provides convenience and TCO savings, but delivers seamless support and prioritization of your most important traffic.

I’m interested – send me the link to watch this video 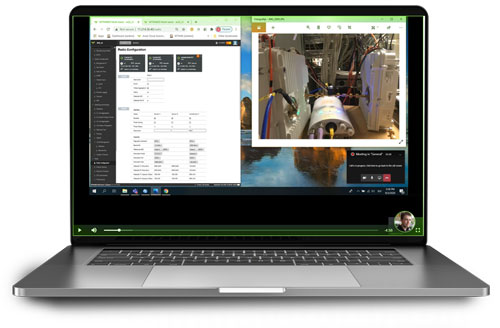